Three weeks before the U.K.s first Tolt in Harmony Competition, I had a little mishap with my shoe (you can read about it here). My Mate Roger was not at all sure that I was going to be able to take part after all. We had been preparing for weeks. Not by practicing the pattern you have to ride, because we don’t have a school, or even a flat piece of ground to practice on, but there is a lot you can do while out rambling. We practiced speed changes, and stopping; and we did lots of walking sideways, or ‘three-tracking’.

The incident with the shoe seemed to have put a stop to my competition aspiration, and Fleygur Fans on Facebook, from all over the world, sent me best wishes, and crossed their fingers, hooves or paws for me. Initially, I got better quickly and hopes were raised, but then, just as the Vet had predicted, I got worse again. My Mate Roger, and the Woman soaked my foot in hot salty water, twice a day, and poulticed my foot, until no more puss came out. Then it was wrapped in a dry dressing. When I was able to walk without limping, My Mate Roger called the Shoe Man. The Shoe Man said, “I wouldn’t be much of a farrier, if I couldn’t straighten out that shoe”, and he popped it back on. He said my foot had healed well, but if there was any problem, My Mate Roger should call him straight away. 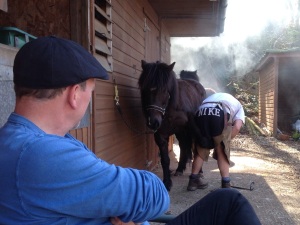 So, now I was ready to compete, though the combination of having been out of work for three weeks, and the fresh spring grass, meant that I was a little feisty! My Mate Roger was a bit apprehensive. I have only done one competition before, and I didn’t exactly cover myself in glory. I went like a bat out of hell round the oval track, with My Mate Roger trying to stay in control, and screamed for My Mare Gydja the whole way round. This time, Blondie was coming with me, and we set off in the Stable on Wheels for an overnight stay near to the competition venue. We had a little paddock to ourselves, with a cute grey Welsh pony next door. The TB and the Arab opposite were a bit less polite, and galloped at the fence, with ears back. Blondie stood his ground, and just stared back, and eventually I got fed up too, and snorted at them. These Big Horses do get in a paddy sometimes. Anyway, there were two post and rail fences between us, so they just had to get over it.

The next morning we were off again, early, for a short trip to Home Farm Equestrian, for the competition itself. Lots of other Icelandic horses arrived, and we all got ready for the practice round. The humans all had a briefing from the judge, and there were lots of questions. Apparently, none of them had done this before. We had a practice go, with feedback from the judge. It all seemed very relaxed, but Blondie managed to get the same score as me, so I was going to up my game for the competition itself. Blondie, and the Woman, are novices compared to us, so I couldn’t let My Mate Roger down. In the practice run, I did scream a bit, because I needed to know the other horses were still there. I couldn’t do that in round two.

After feed back from the judges and a rest, it was time for round two, the competition itself.

My Mate Roger and I went before Blondie, and I think I did pretty well. O.K, I did have a little disagreement with My Mate Roger at one point, and I confess, there is room for improvement! You can watch me on YouTube

I didn’t scream, at all this time, and Blondie did okay too, for his first time out, but obviously not as awesome as me. You can watch Blondie on YouTube too, and see for yourself.

Then it was time for the prizes. Blondie got seventh place, and I got fourth. My Mate Roger was very pleased, we had both done better than he had expected. 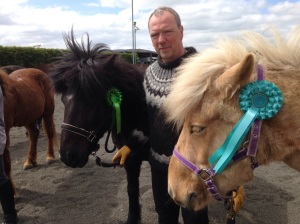 I have the feeling we will be doing more of the Tolt in Harmony. My Mate Roger and the Woman seemed to enjoy themselves, and the other Iceys, and their humans are a friendly herd. Next time though, I am going to keep my eye on the winner. My Mate Roger says, if I can calm down a bit, I might even be a s good as this. I still think I am awesome.

2 thoughts on “A Remarkable Recovery”