It’s tough being famous, emotionally and physically draining, a fact that My Mate Roger does not seem to grasp. I work hard at keeping my stout round figure, as befits a hardy feisty horse of the Vikings, but I am constantly thwarted by his scheming. Once I even had to suffer the indignity of a ‘grazing muzzle’, and that’s an oxymoron as big as you have ever seen. These contraptions are in fact ‘anti-grazing’ devises, and even with my dexterous prehensile lips I had to work extra hard to snuffle up even a tiny amount of grass. It was not to be tolerated and I showed my displeasure by tossing my head and galloping around the field, but the humans did not relent. When the nasty thing began to rub my nose I appealed to the Woman, who is always more open to emotional blackmail than My Mate Roger, and it worked, briefly. After a day without the muzzle, spent eating as much as possible, it re-appeared with a hand-stitched fleecy lining! More concerted action was required.
I attacked the muzzle with my front hoof, which the humans had helpfully fitted with a metal shoe, and after two days the webbing finally gave way. With a shake of my head I was free. I stamped on it a few times, to make sure it wasn’t getting up and set about eating as much as possible before My Mate Roger returned.

His next plan of attack was electric fencing, and this I admit has me stumped. I don’t like the stuff, having once got tangled up in it when I first arrived to live with My Mate Roger. He had arranged a nice little safe paddock from where I could be introduced to the other horses, Big Fat Cob and a big fat painted horse. Having spent a long time in the stable on wheels and not knowing where I was I thought a nice roll would sort me out, but I misjudged the fencing, got a sharp shock and when I tried to run away the fencing came with me, followed by two fat cobs and they didn’t look friendly. I kept running, and they kept chasing until My Mate Roger stepped in and stopped them , and the Woman cornered me and wrapped her arms around my neck to stop me running. I needed a treat after all that excitement and fortunately she had carrots. 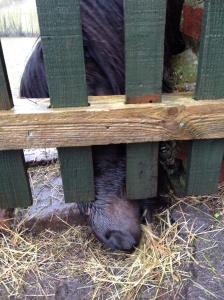 I did reach a truce with Big Fat Cob eventually, essentially by agreeing that he was in charge, and if there was any food going it was his. I have had to use all my Icelandic intellect, which is pretty awesome, to out-wit Big Fat Cob and get some of his share of the hay. Method number one, and not for the faint hearted, is to gradually edge closer and closer keeping a careful eye on his ears. If they flick back stop immediately and wait for him to relax. This is repeated until I am in optimum position, close enough to reach the hay with my front hoof, but not so close so as to provoke a full on lunge and snapping teeth. Next I reach out with my front hoof and scrape some hay towards me, out of snapping range, and then I reach down, extend my prehensile lips and eat the hay spaghetti style.
Method two is far more devious and depends on the relative differences between my intellect and that of Big Fat Cob, as well as the fact that Big Fat Cob is a spooky horse who thinks that horse eating dragons live all around, where as I know they do not exist. It’s very simple, whilst eating hay I spook suddenly and run away, taking Big Fat Cob with me. Once he is nicely on his toes a small spook is enough to send him far enough away to grab some of his hay, and if properly executed just a big flinch is enough. Devious eh?
All year I battle to keep my weight on, and all year My Mate Roger battles to keep it off. Even in winter I can put weight on, while the whole rest of the heard is slimming down. My Mate Roger is baffled, but I am full of tricks. I eat stuff that Big Fat Cob doesn’t even know is edible, I am first in the queue when there are any treats going, and hang about at places I know humans will appear at certain times, and if in doubt, in the absence of food, I conserve energy by doing absolutely nothing. I can do absolutely nothing for hours and hours.