I have always known that being with the horses has been an important part of my relaxation and stress management but more than this, and particularly since owning my own horses I have come to realise how much there is to learn from just being with them. In striving to be a better horsewoman I have paid more and more attention to the subtleties of their behaviours and looking for that ‘gentlest touch and slightest try’ (Ray Hunt, much quoted by Roger Bax!). It hones your feel, reaching for your horses mind and body looking for a connection a way of communicating that brings harmony to your relationship and your riding. It’s quite a quest and I don’t for a minute think I have reached my goal. Roger was the one who loved the schooling and training, I loved to just ride! However Roger and I spent many hours talking about how each of our horses was getting on and being a big reader Roger spent hours and hours reading and we have a bookcase full of horseman and horsewoman wisdom and many DVDs of our favourite trainers. More and more I used horse related analogies when tackling issues at work and I know we were both quite capable of boring others on the subject of our horses but it was an endless source of connection and shared passion for Roger and I.

We were however very different riders. Roger was what I would call a ‘hot’ rider, there was a lot of energy in his riding even though he never appeared to move! .

Roger had more varied and longer experience with horses that I did. He had owned horses most of his adult life, rode with gauchos in Argentina, went to see clinics the States, trained his own western schooled horse and later played Polo. Somewhere between his Western riding and playing polo however he lost some of his gentle touch, sometimes a lot of it!

However although he was not short on opinions or afraid to share them he could also be humble. ‘Horses are a lesson in humility’ was a favourite saying and he sought lessons, help and ideas from a range a sources and worked hard on his riding over the years we had together. For the last few years I have watched Roger explore and develop his riding and regain more and more of his gentle touch as he drew back on his Western experience and studied classical riding but he always enjoyed the speed of a powerful horse. For my part I have always favoured quiet horses and can quickly lose my nerve if my horse becomes difficult to handle for some reason. I learned an enormous amount from Roger and he was humble enough to credit me with improving his relationship with our horses and challenging his ‘hot’ riding when I thought it was getting in the way.

So why do we need to talk about Fleygur? Fleygur was Rogers horse. I thought he was mad to buy him. Fleygur had been much loved and well cared for, certainly his weight was better controlled by his previous owner, but when we went to try him he had not been ridden for some time and obviously had separation issues from his mare. When Roger rode him out of the school and away from the mare he was clearly struggling to control him and there was no way I was getting on! However as he didn’t ‘buck bolt or rear’ even under extreme stress Roger decided that there was a good horse underneath all this and so he bought him.

This blog has already documented much of their journey together from scoring 1.8 (out of 10) at his first competition to his later rosette winning and riding in Rogers favourite class the T1 Tolt – the one where he could ride really really fast! A hot rider and a hot horse. But he did also refine his riding and control and I nearly cried one year because I was so proud, when Roger and Fleygur did a really nice Four Gait performace and they looked so good together and not at all out classed. 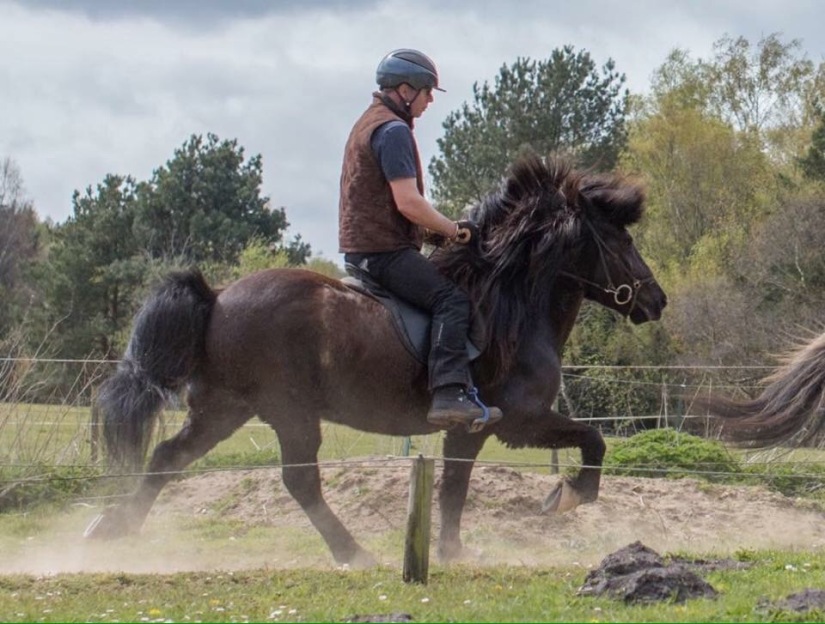 The day Roger died we went riding. Roger hadn’t been to the field for a few days as he had been unwell, we thought with flu. As I brought Svipur and Fleygur in from the field with Rogers brother-in-law Roger was waiting at the gate talking to his sister and as soon as Fleygur heard his voice he pricked his ears and nickered to him. Rogers horse.

One of the many things whizzing round my mind that first night without Roger was what to do about the horses. I didn’t see how I could keep them all, it wasn’t practical. How would I keep them ridden and properly cared for and then there was Fleygur. Famous, funny, fiesty Fleygur. I rarely rode him, he was too strong for me. Rogers horse, how could I part with Rogers horse? I couldn’t, but I might have to.

I was inundated with offers of support with caring for the horses, not just from the Icelandic Horse community in the UK but also from people in the village. It was heart warming and my hope grew that in the middle of my grief at losing Roger I was going to be able to keep the horses who I was sure were going to be such an important part of me getting though this.

However  just looking after them was not the issue I was most concerned about. I knew I had to ride Fleygur and soon, I had to know if it might work. It’s not that I haven’t ridden him before but always with Roger and always with the possibility that I could swap back if I needed to. It’s not that I lacked a positive connection with Fleygur, he knew me and I recently taught him to self load into the trailer having had success with Jandi, though with Fleygur I only needed to show him once. I was also reminded by a friend that in the early months of owning Fleygur, when his behaviour was at it’s worst and Roger developed back pain Roger had considered selling him. As a last resort and because I was too sentimental to allow Roger to sell him I offered to ride him and Roger rode my armchair cob, Beanie. For three months I rode only Fleygur and gradually he calmed down. Rogers sister also told me that Roger had said recently to them that I had been the one that had ‘sorted out’ Fleygur initially not him. Maybe I can do it again? 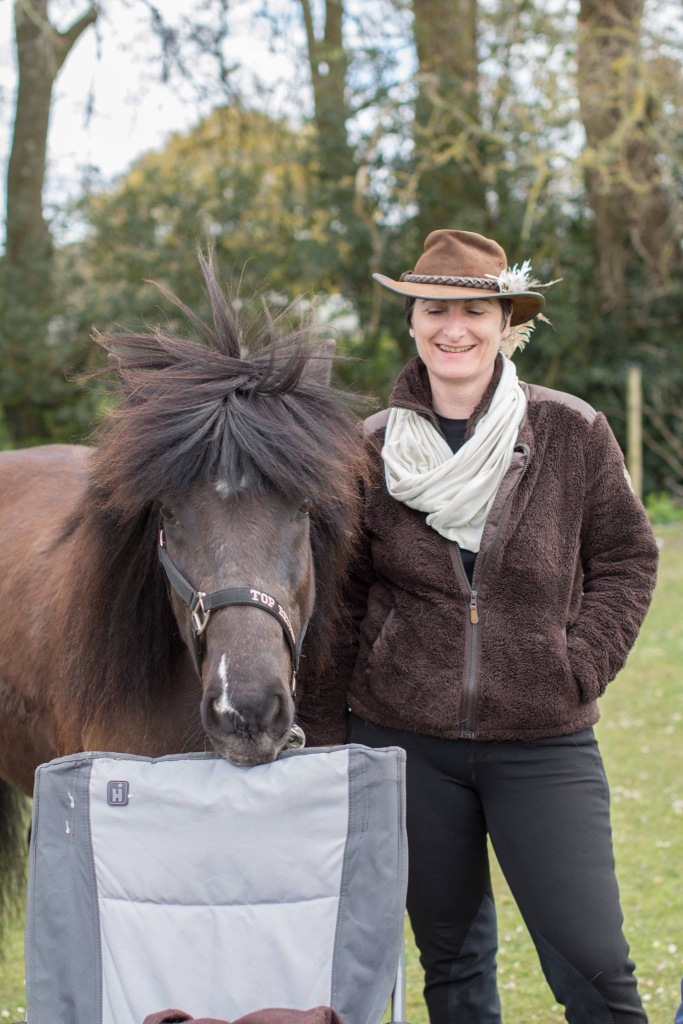 So this week I rode Fleygur, with a friend who is a trainer and judge as back up! As usual Fleygur was nice and calm on the way out and a feisty little bugger on the way home. We also had a scary moment on the bridleway when two very big dogs ran barking at a gate we passed, the horses coped with this well but when a man popped up suddenly from behind to wall (to apologise for his dogs!) both horses decided to try and leg it. Fleygur turned and tried to run and for a brief moment I thought this was it, I was about to be in a head long bolt on a horse that was too strong for me, it was not going to work.  Then I remembered the one-reign stop. My emergency break. Roger had been teaching the horses this in recent months and had made me practice it. I dropped my right rein and pulled the left in a straight line back to my left hip, moved my left leg back to ‘disengage’ Fleygur’s hindquarters and he stopped. I didn’t have to be strong, just accurate and quick. I did it. Thank you Roger for this extra tool in my kit bag. After a short break we carried on with our ride and sure Fleygur was a bit on his toes and fiesty but he did listen to me and his clear four beat tolt is lovely to ride.

I am still struggling to comes to terms with my loss. I feel unbelievably sad. Some people say I am being brave, or that I shouldn’t try to be brave but I am not doing either, I am just trying to deal with is, accepting what can not be changed even though my heart rails against it. The simplest tasks are really hard to start and even harder to complete and often when I am not expecting it the tears flow. The Celebration of Rogers life with his family and friends is not until 1st June and I know that I have a long way to go to deal with my grief but every day my interactions with the horses give me some peace and some smiles. It was a strangely emotional thing to get on Rogers horse, last ridden by Roger the day he died, but I am so glad I did. Now I am going to start my own journey with Fleygur without Roger. I don’t know how we will do, how long it will take or if we will succeed but we are going to give it a try. 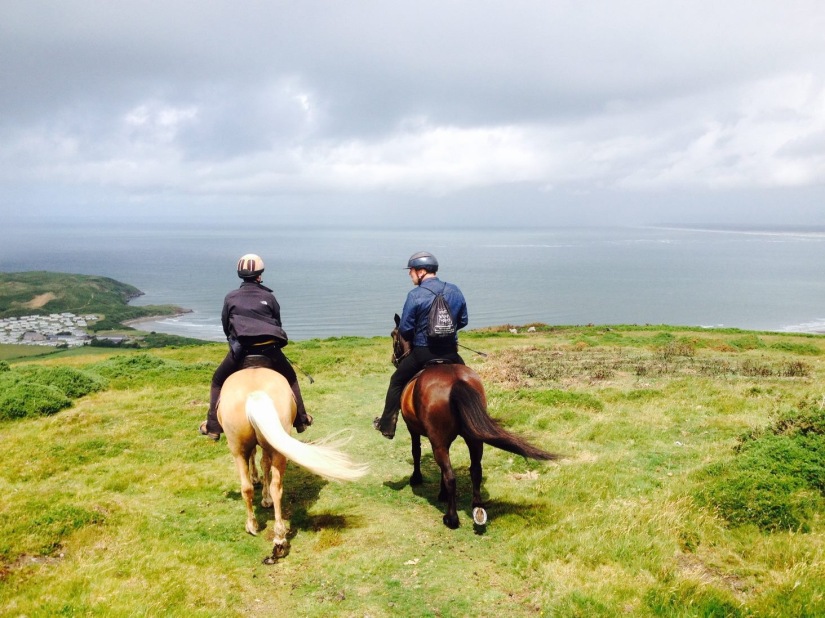 4 thoughts on “We need to talk about Fleygur”