Roger has often said that ‘horses are a lesson in humility’ and on the journey to success it is helpful to remember that sometimes you will take two steps forward and one step back. In my last blog I wrote about how well Fleygur had done at the Spring Show, mainly because of how relaxed he was. Since the show he has improved even more, bringing his back legs under himself to power from behind and producing a much nicer and relaxed walk.   Roger has been using a number of exercises to relax him, get him listening and into the the right shape. We had high hopes for the British Championships, though tinged with a little apprehension. The British Championships were being held in West Linton, Scotland, a place Fleygur had never been, and we suspected that part of his success at the Spring Show was his familiarity with Oakfield Farm.

During preparation for the show Roger was having problems with Fleygur’s floating panel saddle slipping forward. When it stays in the right place it’s great, but too far forward and the panels press into his shoulders. When we bought him he wore a crupper, but Roger was concerned about how this might effect his spine, and Fleygur didn’t seem to like it much. Two weeks before the Championships Fleygur’s new Top Reiter Start saddle arrived and he seemed to go well in it.

For my part preparation for the show was difficult. Work commitments took me away from home so I couldn’t ride much and I had developed a sore back which was taking time to heal. I could not get time off before the Show, so Roger took the horses to Scotland on his own on the Thursday, and I joined them on Friday night.

On the first day of the Show Roger had the opportunity to attend a short clinic with a top rider, Charlotte Cook. Fleygur went well and with Charlotte’s help Roger was able to improve his performance even more. The next few hours for Roger were spent organising and running the Track and Trail class ( a new innovation for the BCs). I would love to enter this myself sometime but even though I had designed it my work commitments meant I couldn’t even get there to supervise Roger! After running around all day later that evening Roger picked me up at Edinburgh station and we went to bed late and exhausted.

So Saturday morning found Team LVH all together and ready for our classes, or were we?

Fleygur was entered in two classes the first was Intermediate Four Gait, where he has to show walk, trot, canter (on the correct lead) and slow and fast tolt.The second class was Intermediate Tolt, requiring slow and fast tolt. Because this is the BCs I couldn’t help Flegur with his anxiety by having Svipur in hand near to the track, and the lay out of the event meant that the track was along way from where he really wanted to be, back with Svipur.

It was immediately apparent that Fleygur was not happy. For both events he was difficult to mount, when he doesn’t move a muscle usually and as soon as Roger was on board he was trying to take off. For the first time ever he was also napping and refusing to go forward. We had never experienced this with him before and Roger had to use all his strength and riding skill he had just to keep Fleygur going forward and to stop him from going up. Trying to use more subtle aids and small moves to improve listening and shape were abandoned in favour of just staying in control!

Roger struggled in the Four Gait to get four gaits and barely managed any trot at all! To get trot Fleygur has to relax and lower his head, and this just wasn’t happening. Canter wasn’t much better and I could see that Roger was struggling for control. However despite all this he did manage to scrape though into the final albeit in last place. His tolt class was much better and although I have seen better slow tolt, his fast tolt was good and he went through to the final in the leading position.

In between him fighting with Roger he did produce some nice gaits, and he wasn’t shouting so we hoped that by the finals day he would have settled and could be in with a chance.

Now it was my turn with Svipur in the Elementary Tolt. At the lunch break, having not ridden Svipur for a week or had the chance to show him the oval track I led him in hand through the warm up area and up to the track. He was really on his toes and by the time I put him back in the paddock I was starting to feel nervous. When the time came however he calmed nicely with my usual pre-hack exercises which include ‘kissing the stirrup ‘, responding the pressure by flexing at the poll, a bit of rein-back, and generally moving his feet around. All the stuff that completely failed to work with Fleygur earlier. However I completely underestimated the time before the class and barely got any tolting in before I had to be in the collecting ring, where I found I had to lead the class in. This is a disadvantage on Svipur, as he will go better on the track with a lead. I was just getting into my rhythm when Svipur spotted a rake lying by the side of the track, a track he had never been on and he was out front, and obviously it was there to eat him! Despite not being a spooky horse he spooked sideways and stopped dead! He went on again almost straight away but by now I had lost my rhythm and was guarding my sore back and we never quite recovered. As a result his tolt was  inconsistent and ‘rolling’. I was called for a tack check so didn’t hear my scores but I knew it hadn’t been a good performance and although we didn’t come last, we didn’t make the final.

Tack check is a standard part of Icelandic shows to ensure that tack is within the rules and correctly fitted and that the horse does not have any injuries. In the preliminary rounds this is done on a random sample, and in the finals all horses are checked.

I was really down about my performance and to be honest I had not been in a great mood since I had arrived. I was tired and felt under-prepared. I definitely was under-prepared. Note to self: I can not just swan up to a show at the last minute, having not ridden my horse much in the last few weeks, do barely any warm up and take him on a track he has never seen before and expect a good performance! The best advice for Roger and myself that afternoon came from Charlotte Cook. For Roger ‘focus on what went well’  and for me ‘get your horse on that track this evening’. So after the days events had finished I tacked up and did just that. Svipur behaved perfectly, no spooking and we did some nice tolting with a bit of coaching from Roger. I tried to get a little trot too, Svipur’s weakest gait, but despite me thinking I had trot Roger told me it was pace so I stopped. I don’t want to teach him ‘piggy pace’! I think I will need some help with knowing what my horses feet are doing, and can feel some more lessons are needed. Roger took Fleygur for one round of trot, just to prove he could and we called it a day.

The evening was spent with the other competitors and visitors, a meal, giving out some prizes, thanks to those organising the event and some silly games (for those that didn’t sneak away at this point!). The Icelandic Horse people are a friendly and supportive bunch.

Finals day arrived. As I didn’t qualify for a final had the option to ride in a ‘Three from Four’ class, but I declined. I already knew I couldn’t get trot and I didn’t want another poor experience on the track. I would rather keep in my mind the nice tolting I had done the evening before, besides the class started at 8am and I needed my rest! Instead I spent the day being groom for Roger.

Fleygur was not much better and was still difficult to mount and handle. Now we were questioning everything. Did the new saddle fit after all? Was he in pain? May be it was just that he didn’t know the place. Should he just do tolt classes, avoid group classes, should we show him at all?  Roger tried to focus on the positives, Fleygur had shown a nice fast tolt, and his trot when he does it is good. He wasn’t shouting and anyway he was going into the final in his first class in last place so what did he have to lose? I advised Roger to treat it as a warm up for his Tolt final.

It worked! This time he got all the gaits and managed to move up two places winning a fourth place rosette. It had been a struggle though and even at the end Fleygur didn’t calm down and fizzed about on the track. I can’t help but wonder how well Fleygur could do if we can get his anxiety under control.

His last class was Intermediate Tolt final but Fleygur was still fighting, and he didn’t go as well as the day before. He dropped from first place to third and as if to underline his fall the skies opened and chucked down a load of hailstones. Welcome to midsummer in Scotland!

That evening over a glass of wine Roger and I conducted a post mortem and made a list of things to do and things to remember for the next show in September and all the others. Here it is:-

1. Always bring rain sheets (what ever the time of year). We did take them, but we didn’t for our first show in 2013.

2. Keep the weekend before the show free to practice and prepare

3. Get to the show early enough to get your horse on the Oval track, even if it is only once and practice your test

4. Always use the same warm up routine, different for each horse.

5. Work out a fixed warm up routine for each of them before the next show! (20 minutes for Svipur, 10 minutes for Fleygur)

6. Bring an alternative bridle and saddle (or don’t change your saddle two weeks before a show!)

7. If Fleygur is playing up get him going forward, rather than slow paced exercises at walk

8. While out hacking do timed tolts and trots to match the classes.

9. Consider teaching Fleygur one class, e.g T1 because the familiarity might help his anxiety

10. Have an honest debrief on what we have learned on the first night, and write it down. 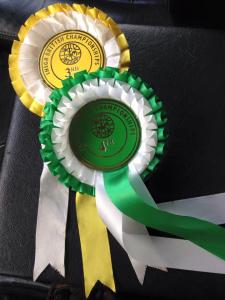 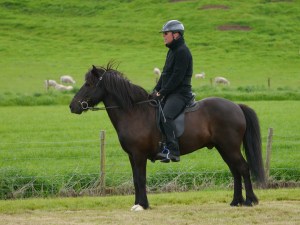 1 thought on “Two steps forward, one step back – The British Championships 2015”