Fleygur Fans following me on Facebook will already know that we have a new addition to our little herd. Those humans who already have Icelandic horses will know by now that they have been infected with ‘the addiction’. There is no cure and no hope. The only way forward is the treatment, and the treatment is tough.

More Icelandic horses. You have the collecting bug, you have no choice.

I got a clue that something momentous was going to happen to us when Mini Fleygur  (see Fleygur Immortalised post) started sending postcards from somewhere in the north. Apparently My Mate Roger and The Woman were visiting Midfield Farm, in Cumbria.

This is the home of my breeder and many of my relatives. The collecting bug had taken hold and without a word to their nearest and dearest they had secretly planned this visit. Other Icelandic horse owners had spotted the signs and knew what was coming.

My Mate Roger was introduced to one of my brothers Fylkir and yes, you guessed it, he was for sale.

But it was my nephew Svipur who really caught their eye……a blond whippersnapper. 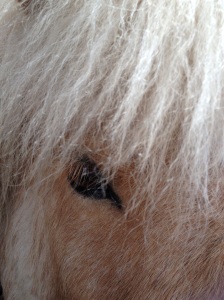 And so that was it.  The deal was done (well, after a few rides, lots of questions and some tough haggling from My Mate Roger). The young whippersnapper was soon to be on his way.

My Mate Roger and The Woman made preparations, which much to my annoyance including cutting my paddock in half with electric fencing. My Mare Gydja was selected as the babysitter apparently because she is the quiet one and least likely to bite him, and she disappeared in the stable on wheels for several hours.

When the stable on wheels returned Big Fat Cob went to inspect. He was not impressed that this intruder was so close to My Mare Gydja. You see while My Mare Gydja is MY mare Gydia, Big Fat Cob likes to thinks she is his. I find it easier to let him think that. He is a 15hh Cob, wouldn’t you do the same?

So the Baby Blondie was finally here and introductions were made. Big Fat Cob was not at all polite .

He took every opportunity to let the Baby Blondie know he was not welcome. 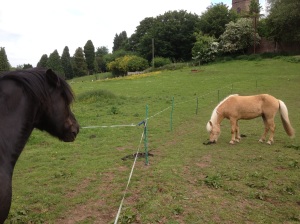 I, on the other hand behaved impeccably. This young whippersnapper was going to need training and I am the horse for the job.